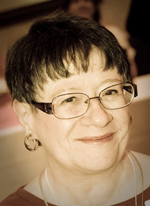 by Marsha Ward @MarshaWard
[Most of this post was previously published on The Ink Ladies Blog on August 21, 2010. It has been mildly edited for updates.]

I've been busy, believe it or not. As I drown in slip-sliding paper falling toward me and my fingers on the keyboard (most of which I could shred, once I extract the odd computer disk, wedding announcement, and hardback book from the pile), it occurs to me that I could share how I keep track of my word count as I write.

Now understand, this can be as complex or as simple as I want to make it. I can use the Excel chart my friend J. Scott Savage sent me several years ago that nags me incessantly, or I can add and subtract words as I write and edit, or I can keep a simple running tally at the beginning and the end of my writing day. I kind of like the simple style nowadays, so I'll tell you how that last thing works.

I love the 9.5 inch by 6 inch one-subject notebooks for this task. They're not so big as to be in the way, and not so small as to disappear amidst the rubble on my desk. I open it up and draw three equally-spaced lines down the page. This gives me two sections of columns to fill up.

In the left-most column, at the top, I put the date. I can put anything else in the nature of notes in that column, like the times I start and end, the scene or chapter I'm working on, and how many hours I work. I see I have a notation saying slippery elm bark and chamomile tea. Ha! I know what scene that one was!

The second column is where I put the beginning word count opposite the date. If I'm starting fresh, this is zero. If I want to, I can add the word count when I do a save, when I get up for lunch, or what-not (I usually only put down the last three digits, or hundreds). The last figure I put in that column is the final word count of the day, unless I want to do a total of words written underneath it. I finish the day with a horizontal line drawn under all the notes for the day, in both columns.

The other section of two columns is for when I get to the bottom of the page. You knew that, right?

How do you find your word count at the beginning and end of the writing period?

If you're writing your novel or other kind of piece in Word, click on the menu item called Review, then highlight all your text (Ctrl+A). In the far left section, look for Word Count. Click it, and you'll have a rough estimate of your words. I say "rough," because it will count every asterisk (*) and Chapter Heading, but it's good enough for starters. Do this again when you quit for the day, and you have the second count.

Actually, if you want an even simpler method, just look at the bottom of your Word document, on the left. If you have Word 2010 or newer, the word count is already there for you.

Or, you can use the software program I use. I bet some of you chimed in with "Scrivener," but no, what I use is similar but FREE! It's called yWriter5. It, too, gives me the total word count of the project at the bottom of the main window (as well as words written that day when I'm finished), so I check the word count when I begin and when I end, and put those numbers in my notebook at start and end of day. Actually, since I belong to a couple of accountability groups, I also note the total words written that day in my notebook so I can report.

yWriter5 and its antecedents were written by novelist and computer programmer Simon Haynes of Australia. He couldn't find a writing software that suited his needs, so he wrote it. He updates it quite often, sometimes to meet suggestions of users, but it's a lean program written to use few resources of your machine. It even runs off a flash drive, so it's highly portable.

You can find yWriter5 at http://www.spacejock.com (Hal Spacejock is the hero of Simon's futuristic sci-fi series). There are several other useful programs to be found there, as well as a link to the  how-to wiki created by the folks in the next paragraph.

This software is free, not only no-cost, but free of nasty surprises like virii, Trojan horses, and other malware. There's an active community of users in a Google group who support each other. The old hands answer the questions of the newbies, and Simon occasionally pops in, too.

I really like yWriter5, not only to keep track of my word count, but for ease of writing a scene at a time (which is about all my brain can fathom at one time).